One of the differences between Crefus and other schools comes from our special worksheets. In our worksheets, we don’t only focus on how to make and operate robots but also include many things about principles needed for making robots -like biology, system of society and factors of physics, which are beyond students’ grader.  Our worksheets take a role of encouraging kids to have a wide range of interests as mentioned above. For example, students generally learn pulley in third grade of public junior-high school. However our students can learn it from the “alligator “ activity of Kicks course and “crane-robot” of third grader on Crefus, learning pulley as a system working for movement in front of them. Moreover, worksheets of each course are developed every year in order to enhance, based on supervision by Dr. Takanashi, professor of Waseda University.
※We inform more detail about our worksheets at free trial session. Also we inform it including our curriculum on our homepage.

Students have opportunities of presentation once a year on Kicks course and twice a year on Crefus course. They make posters about the robots and programs they made or they summarize their works using powerpoint. It is a process to encourage students to take objective views and organize their thoughts. And they have presentations in front of guardians and answer questions from other kids. On the contrary, they listen to other students’ presentations, get stimulations and ask questions. This “expression” caused by accepting others and themselves, which is difficult for general school education to give enough to kids, is a necessary skill to acquire to be globally competitive.

“Independently and Actively Working on” -fostering by active learning

Students are given the social theme at “FLL”, the biggest robotics competition in the world, every year. They acquire the skill of working together with friends and become to have interests for the society through the processes in which they find the issues and solutions in the theme and kids concrete them into the models and posters. Moreover they can directly listen to experts. When students ask questions thought by themselves face-to-face to the experts, they face the kids gently and patiently. This is the way of active learning. Kids will have been required not only basic learning but also their experiences gradually piled by their indepently and actively learning since the university entrance examination reform.

“Logical thinking” -how to think on programming

Logical thinking is building methodical thinking.
It’s not too much to say that this ability is compulsory to gain global competitiveness on business. And it is also required when students do programming to activate robots.
When kids do conditional branch programming, they always write tree diagrams first of all. It is tough work until they get used to it. However they can organize the robots’ movement on a case by case basis in their minds by writing. They face situations like when they equip more than two sensors to a robot, when A is activated but B is not, when A is not activated but B is, when both A and B are not, and so on during their activities. It makes students think how to deal with the problems in order to solve them. For instance, when robots don’t work as programmed, kids think what is the first thing to deal with and what sorts of factors to be thought of. Next, they think about the situation their robots are in now from this. Furthermore, they think about what to do. In this way, their continuous patience and creating ideas keep on until they reach certain goals. Every single step where kids organize things logically and structure their thoughts definitely turns to their strength.

Spacial perception is the ability to promptly recognize how the objects exist directionally and the distances and sizes in three dimensions and how the relation among the objects is. This skill is mainly controlled by the right brain.
Surprisingly It seems like many children cannot answer questions set on the high school entrance examinations like that “ Write announcement assuming you introduce the directions with seeing the map.”
The skill to explain the directions with a map requires the ability to explain logically and to recognize the space. At Crefus, it’s nothing special that students are trained in this ability. Children who have high spacial perception can migrate things from 3Ds to 2Ds and on the contrary can do from 2Ds to 3Ds. Many parents  say, ” We want children to make something however they like. My kids like making things at their disposal.” At Crefus, students assemble the robots with seeing the assembling instructions on the PC screen and improve them as they like. Through 40 times or 42 times of continuous lessons in a year, they work on the spacial perception needed in mathematics. 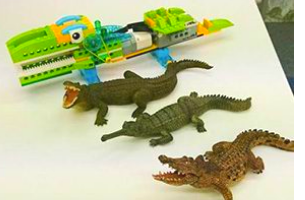 On the pages of “alligator” which second graders attending our trials learn, kids study not only how to make alligator robots but also the ecology of alligators like alligators’ species, their habitats and environments, seeing the world maps. Except for alligators, they make various kinds of creature robots like fish, frogs, lions and birds. At recitals, they don’t only operate their own robots but also answer the quizzes about ecology and structure. 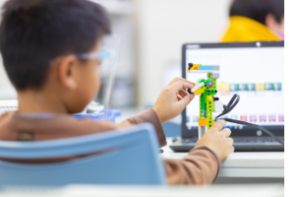 At second grade, kids create robots needing 60 steps in the process. When they  finish all steps, robots sometimes don’t move if students make mistakes reading the assembling instructions. They trace back the instructions to find their mistakes like wrong direction of parts, wrong attached parts and oversight of parts and so on. They also evolve their robots to those they want to complete at their retrofit time. In this way, every kid has their one and only robot. 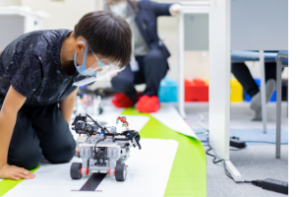 At the second recital of the third grade, a line trace push sumo wrestling is held, which is that when you move quickly to the opponent’s position and hit, the opponent will be pushed out. Kids make their best efforts of what to do in order to create the strongest robots. So they will face many problems such as the following.
“Robots cannot make enough speed to satisfy me if I use the basic program. How should I change the power balance in order to make the best speed-torque ?” “Threshold has already been set. But my robot cannot turn over the opponent’s one. What kind of parts should I use and where should I attach them ?” “Where is the best position, highness and direction ?”
They fight again and again then repeat improvement.

In general, habits affect our behavior and thinking trend while we do not notice. English poet John Dryden said “We first make our habits, then our habits make us.” In order to foster the future of children who are active globally, Crefus has many customs.

Plan: Set today’s goal by themselves.
Do:Work on the tasks of the worksheets actively, create robots, do programming and activate them.
Check:Confirm if the way to carry out the task is appropriate or not. And review how they accomplished their own goals at today’s lesson.
Action-Improve the things which didn’t work well and then challenge them until they go smoothly. 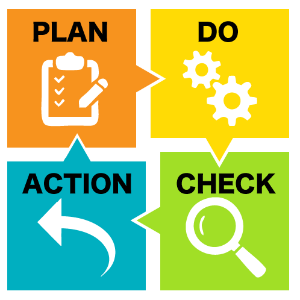 Repeating PDCA like researchers, children will acquire patience and endurance that enable them to boldly challenge what didn’t work well. It is only Crefus that children can build a lot of continued classes at 40 and 42 times a year which other schools don’t provide.

Sorting is to get sorted to a place to classify many parts. Children learn the meaning of sorting in the first class.When we ask Crafus’s students “Why sorting?”, they immediately answer as follows. “It is because I can quickly find parts when I make a robot and I can build a robot quickly.” Sorting is an important habit for organizing things at the business scene in the future.

Currently, there are various types of programming like creating animation and games. Programming a robot means connecting VR (Virtual Reality) and Real (Reality). They confront the unexpected problems like that the program which works as expected in theory doesn’t work well in the real world. And then they make efforts to solve them.

Crefus has no programs that children can easily succeed. When they can not be successful, it will be successful for the first time to build a lot of trial and error. They think many things like next. “What will happen if I do this ?” “If this one doesn’t work well, I’ll try that way next.” “If that one also doesn’t work well, how about this other way ?” “Does the robot have a problem ?” “Or is this program bad ?”. Many failing experiences are a shortcut to success and lead to advancement. Recently, it is said that there are many children who are embarrassed to fail and afraid of failing. We are convinced that the accumulation of challenges like Crefus that the answer is not only one will make the future of the children. Crefus’s students greatly grow in many first experiences and habits not special for us.